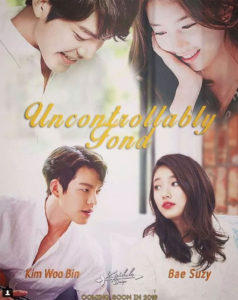 He’s Baaaaaack!! Well….. he never really left, but in terms of the KDrama World, Kim Woo Bin is in another romantic drama and we love it!  And for all you KDrama addicts….let the swooning begin! While many KDrama swooners got a peep of Kim Woo Bin in A Gentleman’s dignity, fully discovered the “Bin-meister” in School 2013 and Heirs, he’s been busy ever since in great movies such as Friends 2,  Twenty, and The Technicians, along with many photo shoots and fan appearances.  He even had time to beaf up this fabulous muscles.  Quelle Surprise!

But now, Kim Woo Bin stars with Bae Su Ji (Suzy) in this new romantic KDrama, Uncontrollably Fond, that involves a grown up Shin Joon Young (played by Kim Woo Bin)  becoming a Hallyu superstar – and an arrogant one at that  – and No Eul (played by Bae Su Ji (Suzy)) who has become a TV producer.  These 2 had a painful past, which was depicted in retro scenes of both of them in high school, and true to form, Kim Woo Bin seems to be cast as the best – and finest – high school prankster-terrorist.  Not as mean as he was in Heirs (can’t help the comparison), but still super awesome with the minute expressions that screams volumes on screen.

The story line already seems to be saucy, with twists and turns regarding Shin Joon Young’s Father, to No Eul’s crush on her best friend’s freshly “exed”-boyfriend Shin Joon Young and the drama that unfolds – and that’s just the teaser.  True to Kdrama form, they were separated by uncontrollable circumstances, only to cross paths again and find out quite a bit has changed.  I watched the first 2 episodes and was really blown away by Woo Bin’s acting skills.  No, really, I wasn’t drooling at all!  😉

For those of you who enjoy KDramas;  you know…..watching all the other actors with boredom, then, of course, listening to that sexy Korean growl of a voice that is uttered from the tall drink of Kim-Woo-Bin water – you have to watch this one if you were a prior Heirs fan, you absolutely must!  But I must warn you, it has a sad ending, although that would never stop me from watching a Kim Woo Bin drama – Never! 🙂

I watched on DramaFever.com.  It can also be found on Hulu.com and EngageMeNow.net. For those of you on the fence about Kim Woo Bin, take a look at this video courtesy of DramaFever.com.

One Response to "Uncontrollably Fond"