I have to start by saying Scarlet Heart Ryeo is an absolutely fabulous KDrama and if you haven’t added this to your watch list you absolutely should. Scarlet Heart Ryeo is packed with so many recognizable names like Kang Ha Neul of Hiers fame, Byun Baek Hyun from the popular Korean group EXO, Lee Ki Joon best know for King, The Clown, and Kim Ji Soo just to name a few.

To place great emphasis on how good I think Scarlet Heart Ryeo is….I loathe any historical period drama.  My attention span for historical dramas are but a nano second and I don’t even last past the 1st episode.  I can’t relate to the surroundings, even though they are mostly beautiful.  I certainly can’t relate to the lifestyle, clothes, hairstyles, etc.  Other than sword fighting and horseback riding, there’s not even a lot of action. This puts the emphasis solely on how good the plot or love story is, and if it doesn’t capture my attention quickly, I am done.

I have no memory of how I stumbled upon Scarlet Heart Ryeo, but it captured my attention from episode 1 all the way through.  I eagerly await each episode weekly as if my life didn’t exist!  When I first started watching, the show focused on a young girl (Hae Soo played by Lee Ji Eun) thinking back on her life which seemed out of control. She had bill collectors after her, cash flow on empty, while she’s in a place near the water and sharing real estate space with the local resident trash-can bum.  The realization puts her in an even worst state of despair.

However, a kid nearby falls into the lake and because no one else seems to notice, she jumps in to save the child, only to find herself transported back in time to the Goryeo Dynasty, where she 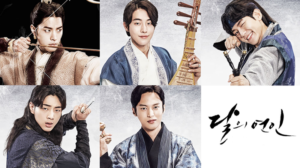 lands in the body of someone who is the cousin of the King’s 8th son’s wife.

The King has a TON of sons (thankfully, he had many wives), but somehow when Hae Soo pops into this era, all but a few of the princes seem to notice her, especially the bad-ass (my opinion) 4th prince, Wang So.

The 4th Prince Wang So 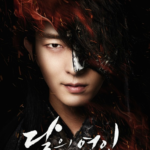 Ki), who I think is the true star of this show – I have to tell you he is the reason I hold my breath each week.  Now, don’t get me wrong – he is gorgeous – and you would think that’s the only reason WHY I watch every week. However, his acting skills in this drama is absolutely awesome! I know, because I was inspired by his fine-ness 😉 to find another drama (Arang and the Magistrate) he stars in and  watch while I wait for new episodes of Scarlet Heart Ryeo.  I am amazed they are the same people.

Lee Joon Ki has completely transformed into this dark, scary, outcast, misunderstood prince with a scar on his face, with subtle movements of his eyes, his voice, his stance, his fighting skills.  Wang So’s character is intricately complicated, which makes you want to continue watching to learn more.  They say good girls love bad boys, but that is not the case between Hae Soo and Wang So.  Even Wang So’s first encounter with Hae Soo, which was one of annoyance, was interesting, as she stood in his way while he barreled down a path on his horse through the town’s central area. He swooped her up as to not run her over but then tossed her off his horse like a bug when he cared no longer – all of 5 seconds.

Throughout the show Hae Soo and Wang So’s paths cross constantly.  He develops feelings for her because she is the only person that appears to not be afraid of him, even though he constantly threatens her with death and she is actually afraid of him.  Hae Soo is also intrigued by the prince’s mysterious personality, the scar on his face, and his intense discomfort with how he was treated because of it.

Hae Soo’s bravity and experience in the modern world allows her to mix some make up to camouflage the scar, which helps the prince out in a pinch, and helps him gain favor with the people of the town and the King.  Wang So’s feeling for Hae Soo is even more heightened as he feels he can now trust her.  He does everything in his power to protect her, much to the chagrin of Hae’s Soo’s in-law Wang Wook (played by Kang Ha Neul) whose wife has now died. Wang Wook has also developed feelings for Hae Soo, which are reciprocated.
A complicated love triangle is always the order of the day in every romantic Kdrama and this one does not disappoint.  There are other princes that have feelings for Hae Soo which makes this somewhat of a love triangle.  The playful Wang Eun (played by Byun Baek Hyun) also has feelings for Hae Soo but he is a bit young and the feelings are not reciprocated.  The King also married him off to one of the king’s general’s daughter, a tough-as-nails take-no-prisoners bad-ass warrior girl who is in LOVE with Wang Eun and begs her father to make it happen.  She knows that Wang Eun loves Hae Soo, and even went so far as to ask Hae Soo to be Wang Eun’s second wife, but Hae Soo refused (‘cause she’s hoping something can happen with Wang Wook).

This show is so cool, with all it’s twists and turns.  I am hoping for Wang So to win Hae Soo’s heart in the end but he has a tough road to hoe.  In the meantime there are prince’s plotting the king’s murder, they’re even trying to jump ahead of the crown prince to be king if that occurs. There are evil queen mothers plotting to make their sons king, and even secret love relationships and rivalries that make this drama interesting enough to hold my attention all the way through. And the eye candy of all the princes “ain’t” bad either! Even if I can’t historically relate.  🙂

Definitely add this one to your watchlist.  DramaFever.com is where I’m watching it.