I’ve been gone awhile from my KDrama posting but not from my obsession ;). I still have “the fever”, and I’ve been watching quite a few of the them.  To name a few, Orange Marmalade, High Society, I Order You, The Time I Loved You, My Love Eun Dong, Blood (which I never finished….couldn’t take any more!), and these are just the recent ones.

Let’s start with  Yeo Jin Goo:  He plays a popular high school student by the name of Jung Jae Min who meets the new “down low” vampire transferee, Baek Ma Ri (played by Kim Soel Hyun), a girl who just wants to blend in and be like everyone else.  Jae Min falls hard after Ma Ri accidentally bites (nips) his neck on the train, but of course there’s more to this story than just a typical high school crush, in true KDrama fashion.   Throughout any  drama,  I am very impressed when an actor shows emotions in an intense way, without seeming like a soap opera character, and Jin Goo achieved this flawlessly.  He definitely “woke up like ‘dis“.  It was 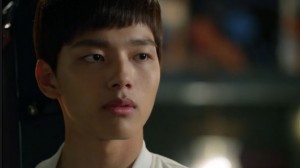 so intense and so natural, his anger, his love, his annoyance – all of it felt like I was eavesdropping on someone’s reality.  He made me notice every “death stare”, and made me focus only on his emotion.

Now for a cutie-patootie like Yeo Jin Goo to make a girl focus on the story line and the emotional aspect of it is quite a feat, but he pulled it off.  It may not have been the most popular current drama, but he should get some sort of award for this one.  He reminds me of the seasoned professionals – Seo Ji Sub, Song Seung Heon, Hyun Bin, Eric Moon, Won Bin (remember “Man From Nowhere?), who’ve all mastered the emotional acting skill very well.  Yeo Jin Goo will have a long and lustrous career if he keeps this up.  He can only get better from here. 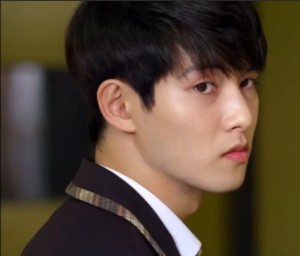 Now Lee Jong Hyun, on the other hand, didn’t show a wide range of emotions in this drama, but what little he did show, his mannerisms were perfect for it.  Lee Jong Hyun played the annoyed, bored, impatient, sullen, slightly-too-cool to “try too hard to be mischievous” vampire student Han Si Hoo.  He just seemed constantly irritated at anything human related, and was never afraid to express it, even if it created a ruckus.  These emotions all suited Lee Jong Hyun’s character  well, and he had the “annoyed” walk to match it all.  It even came across as a little sexy.  Typical second male lead, you don’t really notice how cute they are until about half way through the drama.  They always seem to creep up on you. He did that.  Anyway, they couldn’t have picked a better person to play that role.  Even my favorite bad boy Kim Woo Bin wouldn’t have done a better job in my eyes.  I think Lee Jong Hyun was perfect for the part. 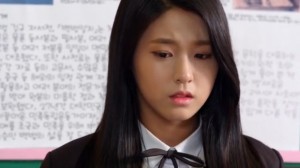 Finally, the female leads are Kim Seol Hyun and Gil Yeun Hye.  Kim Seol Hyun’s character really just had one expression most of the time….worried.  She was worried about being discovered, falling in love, Jung Jae Min, her family, her classmates….worried.  She’s a very pretty girl, I just wished they’d added a little anger, cheekiness, frustration, anything along with the worried.  But she channeled  worried very well, and her character did show a ton of determination and strength.  She really was in “super like” with Jae Min, because she had an alternative with Han Si Hoo, who did like her, but she wouldn’t give him the time of day in the love arena.  And Si Hoo was no chopped liver. 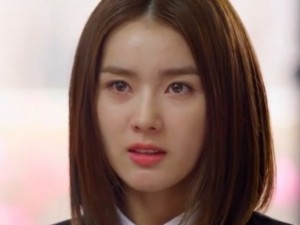 But Ah Ra, played by Gil Yeun Hye, got her vampire-loathing claws in Han Si Hoo.  It took a cute mean-boy to turn her around.  She was the ultimate mean-girl; pretty, popular, and impatient. She calmed down her “mean-ness” after a little coaxing from the boys, and turned out to be a vampire ally instead of an enemy.

Orange Marmalade was a neat little KDrama, and I watched it on Viki.com.  It’s completely finished with just 12 episodes, so for you marathon pros, now’s the time to watch this one, and it’s a short one that I’m sure you can knock out in a weekend.