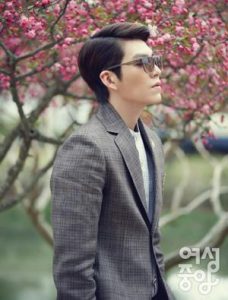 Everybody knows that Kim Woo Bin is one of my top three all time favorite Korean actors. Recently, Kim Woo Bin has been diagnosed with nasopharyngeal cancer, a rare form of cancer that affects the head and neck area (behind the nose and throat).   Though the cancer is rare in north America, affecting just 1 in 100,000, the odds jump significantly in places like southern China to 80 in 100,000. Other areas of China see a 7 in 100,000 rate, and places like Alaska and Greenland have an 18 to 100,000 odds of being affected by this type of cancer as stated in American Family Physician (AAFP) website.

I am absolutely blown away by the news that someone so young can be diagnosed with any form of cancer but it can happen. I am even more blown away that it happens to him. I and many of his millions of fans want no harm to come to this man.  Kim Woo Bin always appears humble, hardworking, considerate of others and grounded, and while I wish this on no one, it is sad to hear that he has this hardship ahead of him.

It was stated by Kim’s agency that the Korean actor “noticed something abnormal” and got himself checked out at a hospital, which led to the discovery of nasopharyngeal cancer.  Thankfully, the cancer was apparently caught in the very early stages, and he is currently starting radiation treatment and taking other medicines, while halting his work activities.

Kim Woo Bin is a former model turned actor who has gained massive popularity both at home in Korea and abroad, and has starred in many Korean dramas such as Heirs, Uncontrollably Fond, School 2013, A Gentleman’s Dignity, Vampire Idol, To The Beautiful You, as well as many movies and other dramas. He was set to begin filming in the crime thriller Wiretap this summer, but more than likely production will be delayed.

I pray he has a speedy recovery and comes back even stronger than ever.  All KDrama fans and Kim Woo Bin fans are praying for 김우빈 씨 and wish him a very speedy recovery. 김우빈, 화이팅!