Like a large population of KDrama fans, DramaFever has been the anchor for our KDrama viewing experience for many years.  I myself started with HULU.com many years ago and graduated to DramaFever.

KDrama Lovers Around The World Shocked

This week, on October 16, DramaFever placed a notification that it would shut down with the announcement on it’s website: 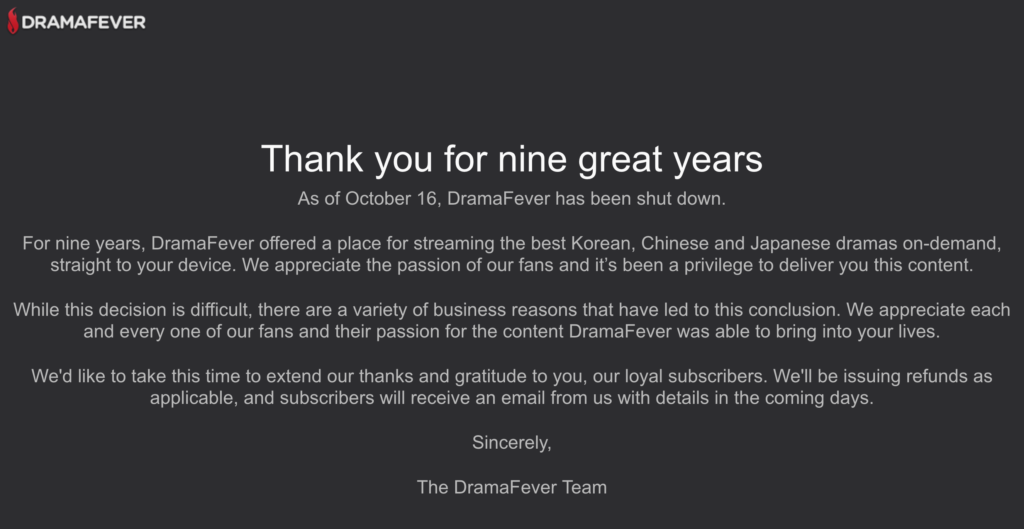 To say I was shocked is an understatement.  Of all the streaming services that feature Korean, Japanese & Chinese Dramas, DramaFever was one of the most popular.  They had fabulous content about the Actors, their desktop site was very user friendly, and their monthly premium subscription cost was super cheap.

I am surprised that such a huge company like Warner Bros and their subsidiaries would handle the shut down of DramaFever in such a bad way – with no advanced warning to their subscribers.  Though I’ve never had this happen to me, it almost feels like a break up via text!

Did Warner Bros Surprise Us?

But I have to say I am not surprised.  In 2016 Warner Bros acquired the popular streaming site and I felt like there was a possibility that Warner Bros would swallow them up and spit them out as something different.  Even the app was never really updated other than the bare minimum, and to me, never as user friendly as the desktop site. Still, I stuck with my premium subscription because I loved their line up, the great subtitles, the ability to get notifications when new episodes were uploaded.

The Beginning of the End for DramaFever

In the past year, I’d noticed the quality of the service on the app was diminishing. Very recently I’d gotten irritated at the app and felt like it was not worth me paying for a premium subscription, even if the cost was cheap. The subtitles weren’t showing, and instead of DramaFever dealing with it, they waited until Apple pushed an update which corrected it.  That was my last straw, I felt I’d just deal with the annoying commercials and keep my money.  I actually sent in a request to cancel earlier this month because the app wasn’t allowing me to do so directly.  When I tell you I got an email in less than 2 minutes that my premium subscription was cancelled, I was shocked! That fast? That. Fast.

Anyway, I am sad to see them go.  Other streaming sites have tons of content but they just weren’t as robust as DramaFever.  DramaFever had tons of exclusive shows, like Heirs – my very first Korean Drama – which could only be found on DramaFever commercial free with a subscription.  What’s an Heirs addict to do now? HULU has it as well, but even with a subscription, HULU has commercials.

DramaFever, you will be missed.

One Response to "DramaFever Shut Down"