First of all, if there is a show out there where Kim Woo Bin is the star, someone tell me now.  I did see a movie trailer, Friends 2, but I haven’t yet researched where to find and watch English subtitled Korean Movies, but I’m sure I’ll add movies to my blog once i figure that out.

**update** I found a place for Korean Movies – Viki.com

If you’ve read my first post about Korean dramas, you’ll know that I think Kim Woo Bin of Heirs is All That-ah! And while it’s clear that I’m fascinated by the physical attributes of this tall drink of water, his acting chops seem to be on point as well.  I must admit, if we stripped away all the eye candy of Heirs, and focused on the love story/triangle between Kim Tan (played by Lee Min Ho) and Cha Eun Sang (played by Park Shin Hye) and Choi Young Do (played by Kim Woo Bin), Choi Young Do kinda made that school a little more interesting…..for the long haul of the series anyway.

It was great peeling back the layers of Young Do.  The initial bully-bad-boy assumptions gave way to the can’t-help-himself immature love-crush that Young Do developed for Eun Sang, to the hard-ass that in the end showed true concern for the father that tortured him, really just wanted his mommy, and shed tears because he yearned for a hug from said mommy.  Did I sum that up right?  OK.  Kim Woo Bin played all those varying emotions so well, and each one had a different face.  A True expression.  Not just blinking rapidly of the eyes or staring off into space, but emotions BEHIND THE EYES that pushes through and jumps out your TV screen.  Exaggerative description, I know, but when someone can look at you and start out looking ….oh let’s say – annoyed – and then without moving their face they change the annoyed expression to say…. – confused – and it registers loudly on camera….  THAT’s acting behind the eyes.

I’ll give you an example of what I mean.  This example is dangerously mischievous:

Think camping trip, the next morning when everyone is eating breakfast (I am being particularly vague for the ones that may not have yet seen this episode) Eun Sang leaves the group and exits by the pool.  Of course Young Do follows her, she tries to avoid him and at some point he grabs her hand (like all the boys who likes/loves the girl seem to do in these Korean dramas) and spins her around but she’s now dangling over the pool.  His grip on her arm is the only thing that stops her from actually falling into the pool.  He looks like he has the option at that point to either pull her up, kiss her, or let her go.  Young Do has this menacing stare – not angry – just the stare that says “I won’t leave you the hell alone even if you beg”.  In that “Young Do” brain, he’s not getting the response he wants from Eun Sang, and decides to turn back into the expert bully terrorist of Jeguk High – and proceeds to change his expression from menace to smile in the creepiest way – and Eun Sang recognizes the creepiness, albeit too late – right when he lets her go and she drops into the pool.  Now it took me a minute to write this all out, but in TV time this change in expression happened in seconds, but it emoted the feeling of “oh crap, nothing good is gonna come from that smile”.  You knew exactly what may happen without Young Do having to say a word.  That, in my opinion, was some bad-ass acting and I don’t know how many takes it took to get that right but it was powerful.  Up until he let her go I had hoped he would start being nice to her, I was rooting for him and Eun Sang to get together, but he went back to his old school bully ways, and I knew it as soon as I saw that smile – before he let her go – that this scenario is not going to end well.

My point is though, his expressions of emotions behind the eyes, were never repetitive through out the series.  He didn’t always give me that annoying “same face” for every emotion he had, and I liked that about Kim Woo Bin’s acting in this series.

Young Do kept me on my toes, from the fear, respect and hatred he sometimes had for his father – and when it came to his father those emotions were all intense – to the anger he felt towards Kim Tan, to the crush he felt for Eun Sang and couldn’t quite handle, to the irritation he displayed when he had to work washing dishes at his father’s hotel, to the titillation he felt when Eun Sang made Rachel mad just by breathing.  Every emotion was amplified with him.  They said throughout the show that Kim Tan “goes all out” but those words should have applied to Young Do.  When he was rejected by Eun Sang his “hurt” was always hidden behind his sarcasm which was always “full-on”.

He had so many layers to his character, and like an onion you had to peel it all back to reveal it all, but the “stink” of the onion (his bullying character) was always there. Who would think the “bad boy” would be lonely? Who would think he would cherish the experience of the meal he shared with Eun Sang’s mother?  His emotions were intense but at the same time never direct, I frequently felt like I was intruding on private moments with him and praises can be given to the writer who developed Young Do’s character, but especially to Woo Bin, who interpreted the character’s every minute detail so beautifully.

Yes, the boy is sexy, in a way only he can be. He even made the clothes he wore sexy, I call it the Woo-Bin-Effect. (I actually started to notice, even down to the boots). I always notice when a good looking man is well dressed, but when I start looking at the details of the clothes/shoes, that’s when I’ve really noticed the whole man. But after I got over the “Phine-ness” (translation – uber fine, so fine that you have to spell “fine” with a “ph”, not “f”), I started to see that he was one fine (no pun intended) actor.  I watched him in another series, I think it was School 2012??? not sure but he was mean in this series too.  A different kind of mean, not sassy, just angry-evil, but I think his range was way better in Heirs. I see a star when I watch him. Sure, his meteor would rise so much faster if he had the pretty boy looks of other actors, but Woo Bin’s features are very unique, and still registers as very handsome in a manly way. He’ll get there. He even keeps me in a trance when I see him in runway shows, and I think he’s an excellent model. 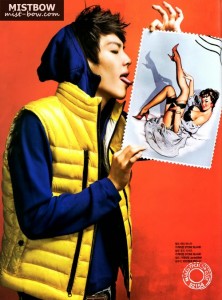 I would love to see him as the main star of a series.  I would definitely be waiting – and watching.  If anyone knows of a show like this, with english subtitles of course please tell me! If I keep watching these shows like this, I’m gonna have to learn some Korean!