I’m now watching Friend Our Legend on Crunchyroll.com.  It features Hyun Bin *yay*, Seo Do Young *double-yay*  Kim Min Joon *triple yay* and Lee Shi Un *A Flavor For Everybody*.  Now I was just reading up on all Hyun Bin’s series, and I was really looking for something where he played a different character than the normal romance shows, and it seems he was a bad little 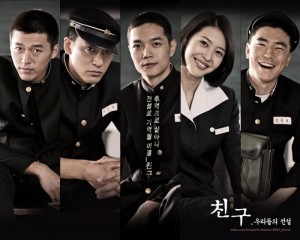 “gangsta” in this one, and I wanted to see how he did with that.

All About The Bromance

What I discovered was a series that showcased friendships – male friendships, more specifically – and it was very refreshing when things were good, and really sad when things turned out badly.  I’m on episode 5, so I’m viewing the good parts right now, but in episode one it appears the series started with the ending and worked it’s way back, showing just how very good friendships can go fatally bad.  As the show progresses back in time to the beginning, it showcases all four friends, and how their unique personalities blends into this special Bromance.

Hang Dong Soo (played by Hyun Bin), is the natural fighter, protector of friends, number 2 man in school, silent onlooker, and very hard to read his feelings, except when he’s angry or kicking butt.  Then there’s Joon Sang Taek (played by Seo Do Young), the bookworm class president with awesome grades who worries about getting into college, specifically SNU, the non-fighter in the group, and I do mean NON FIGHTER.  There’s Lee Joon Suk (played by Kim Min Joon), the schools number 1, who’s not afraid to throw blows right along side Hang Dong Soo, the rebel trouble maker.  Finally, there’s Kim Joong Ho (played by Lee Shi Un), the prankster, talkative, funny guy of the group, never a fighter, a wanna be lover boy who still needs some practice, but very lovable.  The personalities are dynamic and fun to watch, and they all fall in “like” differently.

Eye Candy For Everyone

What’s funny about these four so far is it seems three of them like the same girl, yet none will admit it except Joon Sang Taek ….. I’m just dying to see how that unfolds.

Watch Friend Our Legend on Crunchyroll.com

And there’s eye candy for everyone.  Oh, did you think I would get through this post without talking about the eye candy? Not!  I felt like I was watching Heirs again, where there was so much eye candy my eyeballs couldn’t figure out which direction to go in.  Of course I’m familiar with Hyun Bin and Seo Do Young, and it was great to see both of them playing different characters than their usual romance shows. “Gangsta” suits Hyun Bin.  Then again, he could be a crack addict in a movie and it would suit him, dimples, good looks and all.  And It surely doesn’t matter what Seo Do Young plays in, his super tall frame, and beautifully unique face just makes a girl melt.  And I love the short haircut, just absolutely love him.

I really like the Bromance aspect of this series, and since the drama started out with the ending, I know it’s not going to last, but it’s great to watch how this Bromance unfolds.  I’m watching for that, and the twist to the plot, I know it’s in there somewhere, I’m waiting for that  shoe to drop.  I’ll keep you posted, without giving away the whole story to anyone who hasn’t seen this one.  You can find this show on crunchyroll.com, I couldn’t find it on my usual KDrama spots.  Tah Tah for now.