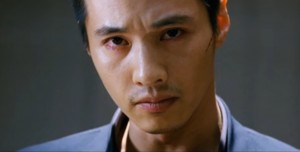 I just completed watching The Man From Nowhere starring Won Bin as Cha Tae Sik. Oh! My! Goodness!  That was a DAMNED good movie and partly because Won Bin was COMPLETELY transformed.

Won Bin In The Man From Nowhere

I’ve only seen Won Bin in Autumn In My Heart but the Won Bin that existed in Autumn In My Heart was nowhere to be found in The Man From Nowhere. Not a single drop of Han Tae Seok was even evident in my brain cells while I watched this movie, and I was actively looking for even a hint.  He was not in the movie, he was not in my head, he wasn’t in the room, heck not even on this planet!  It is my understanding that Mr Won Bin got numerous awards for this movie and I’m here to say he deserved every single one of them.  This “danged” movie was so good they should give him an extra award just for showing up.  The award would be called the “Thank You For Showing Up And Rocking It Today – Again!” award.

Wow.  I am speechless.  Why the breathless response you ask?  In my quest to enjoy all things KDrama-ish, I’ve ventured a little into some movies.  Really just to see my favorite Korean stars in a movie instead of a kDrama.  While I loved my favorites in these movies, I’d noticed that the progressions of scenes in the Korean movies I’ve seen always seemed to be a little choppy, sometimes hard to follow.  I noticed this pattern on several Korean movies, to the point where I started to think “maybe they’re really good at making KDramas, not so good at making movies”.  The Man From Nowhere proved that thought very wrong.

Remember, I’m a romance girl, I’m not too big on the action movies.  But the story line in this movie was so awesome, so well written and directed, I didn’t need any romance to water down the violence. At first, I started to think it was a Korean version of Taken. Sort of how they did a Japanese remake of Ghost with Song Seung Heon.  But The Man From Nowhere was not a remake of Taken, oh no.  That thing was it’s own story, and I was so impressed with all the characters and especially Won Bin’s acting.  I never would have thought he was capable of being so dark.  I guess that’s why they call it acting.  Ironically, I saw an interview with him right before I watched the movie, and he was clearly uncomfortable, a man of very minimal words.  Whether that’s his true character or he was just not that comfortable with the interview, he was more like the silent type of Cha Tae Sik in the interview.

Watch The Man From Nowhere On Hulu.com

Now I have to say the dark, mysterious, highly trained nature of Cha Tae Sik, being obsessively intent on finding his neighbor’s little daughter who may be in a heap of trouble, added the sex appeal to this movie.  You know, that savior sex appeal that women love – a gorgeous man who will kick ass to take care of his own.  This movie is like a chef who adds flavor to a meal without being too heavy handed on any specific seasoning, making sure you savor the flavor, without noticing a specific spice. Even though the sex appeal was there, it wasn’t overpowering the movie.  I wasn’t busy drooling, I was enjoying the whole flavor…the action, the somewhat sullen relationship between Cha Tae Sik and Jing So Mi, the intrigue of the underworld, the sexiness factor, I could go on and on.

Throughout my short KDrama & KMovies experience, I’ve always looked to So Ji Sub for the dark roles.  Whether Ji Sub would have been as good in this movie as Won Bin I will never know, but I have a new found respect for Won Bin’s acting skills after seeing his performance in this movie.  I think the marriage of that director Lee Jeong Beom, the strong supporting casts, along with Won Bin’s exceptional leading role, made for a perfect blend and a super great movie.  I am actually going to look for movies directed by Lee Jeong Beom and watch them, because this director clearly knows what he’s doing.  The plot and the movie progression or “flow” was so smooth, seamless and interesting I didn’t even notice (obsess over) Won Bin’s “phine-ness”.  Now THAT’s good directing – and acting.

**If you have a Netflix account, you can see it on Netflix as well**

One Response to "The Man From Nowhere"