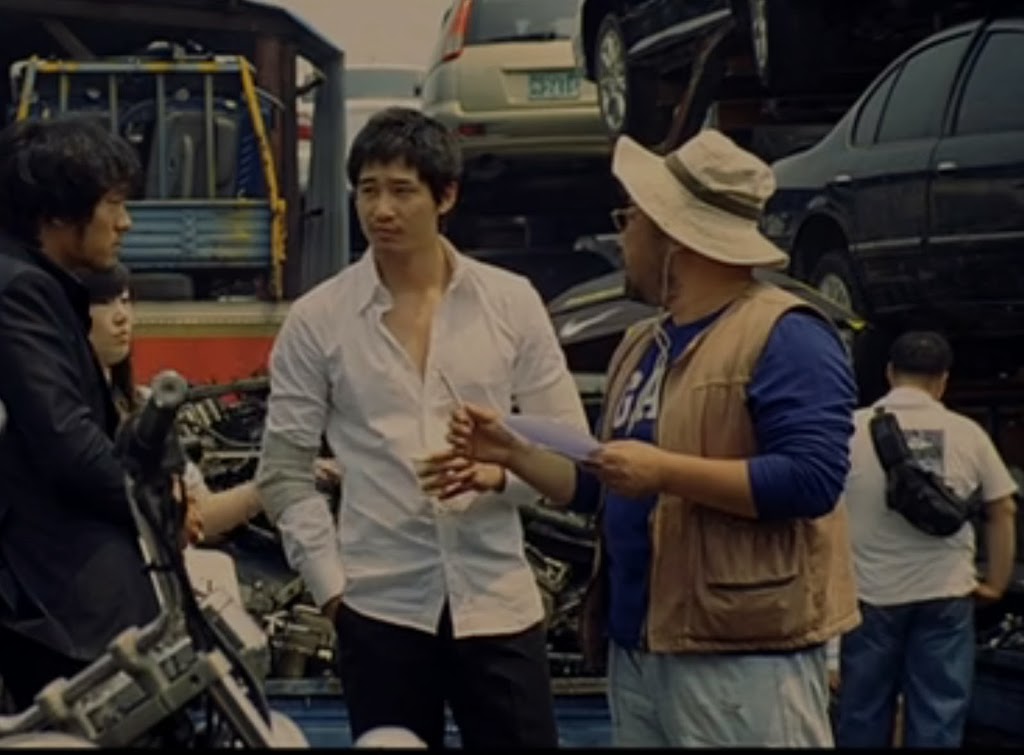 I’m just discovering the movie Rough Cut with So Ji Sub & Ji Hwan Kang.  It wasn’t a bad movie, I’m just not a huge fan of action movies. I’ll watch them if there’s someone in there I like, and I definitely like So Ji Sub.  The movie was about a gangster (Gang-Jae played So Ji Sub) and an actor (Soo-Ta played by Ji Hwan Kang), whose paths came together when the gangster challenged the actor to film his fight action scenes for real.  The actor took him up on the challenge, where the movie called for the actor’s character to win the last fight scene at the end.

I found this movie a little choppy in the beginning, with really short scenes that seem to start no where, end no where and enlightened the viewer on nothing, really.  The early scenes were also filmed almost entirely in the dark, where I couldn’t tell who was who at all, and in the beginning of a movie I feel that’s where you make a connection with certain characters.  It really almost lost me from finishing the moving.

Now So Ji Sub’s character was one dark “somebody”, and I use that word as an alternative to what I really want to say.  He was a typical Korean drama with a contrasting character.  Gang-Jae was loyal to his boss in jail, evil and quiet to his poor victims who were unfortunate enough to be on his wrong side, twisted enough to want to “act” in a movie by doing everything – including the disturbing stuff – for real, and intrigued with the girl and the movie business he was dabbling in. 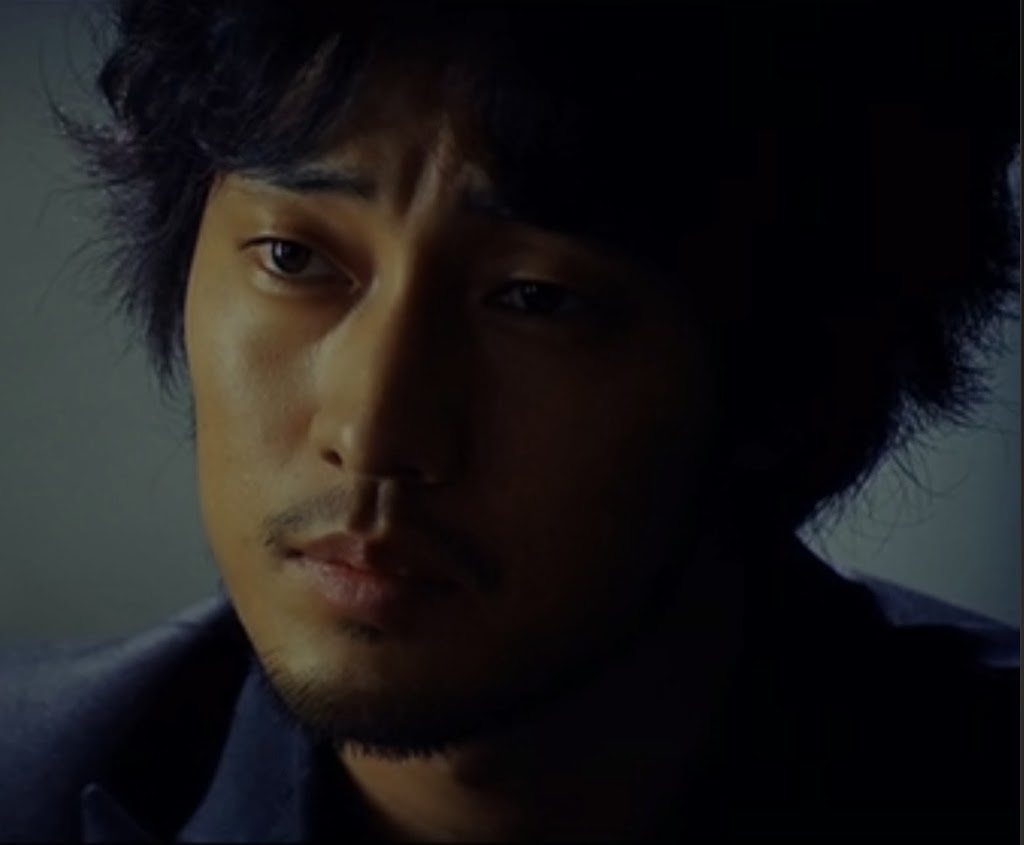 I tried really hard not to drool, but when the first fight scene between Gang-Jae and Soo-Ta was done and he looked down at Soo-Ta on the ground…..those eyes, so intense, even in the smallest movements.  I’ve personally never gone after a bad boy in my life, and I wonder why my crush for this particular man is more intense when he plays the bad boy roles.

So Ji Sub is a very beautiful man.  I like clean cut guys, but I prefer him scruffier, and that’s not like me. When I look at his clean cut photos, movies and videos, it’s …….. nice.  When I look at scruffier versions of him…wild or tousled hair, facial hair, very casual clothing ….. he’s downright hot.  Strange, that is not normally my style.  If you look at all the Korean eye candy I’ve drooled at – Kim Woo Bin, Song Seung Heon, Choi Jin Hyuk, Lee Min Ho, Daniel Henney, Seo Do Young – They all have a clean cut image.  They also all stand 2nd place to So Ji Sub in my opinion.  I’ve always understood my crushes, my drool-fests, why I think someone draws me in.  I know my “type” well, although my type is very broad.  There is one aspect of my type that always sticks to clean cut looks.  For example; even though I loved Song Seung Heon in the movie When A Man Loves, I didn’t really like how he looked in the thuggish error at the beginning of the movie.  This was the 1st time I’d seen him in any show, and of course I noticed his eyes first, thinking that he “could be a good looking man if they’d just clean him up a bit“.  I actually literally had that thought, and then they did clean him up, and the gush fest with Song Seung Heon began. 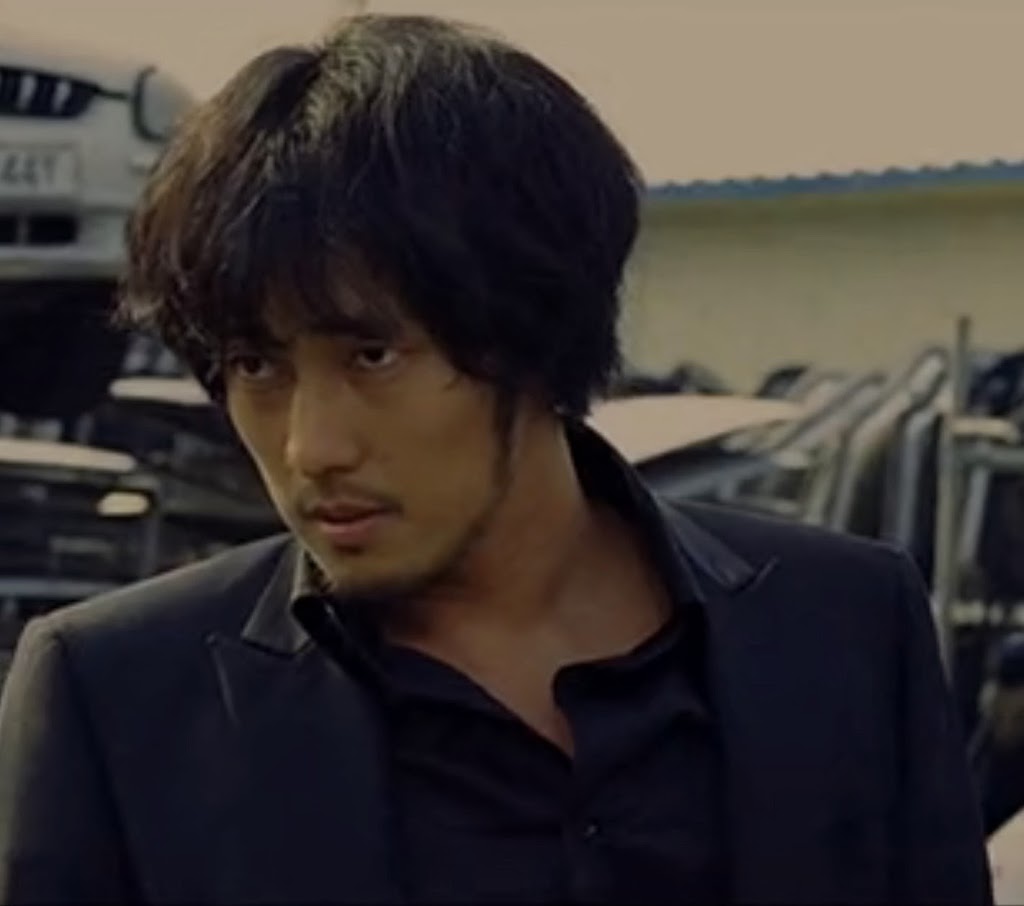 I NEVER have that thought with So Ji Sub.  Even in the final fight scene, with Gang-Jae and Soo-Ta, under all that mud I could tell which one was So.  His eyes were certainly recognizable.  I’m starting to wonder if he came up to me covered in mud would I still think he’s cute?  Maybe?  I love how he looks at people.  I love all that intense-ness (is that even a word?).  I find him sexiest when he’s punching, or getting ready to punch the crap out of someone.  Bizarre.  He’s sexy when he shows intense desire for someone by staring at them in that Ji Sub way.  His “intense” stares are really quiet, sullen, piercing.

Even when he’s in a suit, but his character is a bad boy character, I’m drawn in.  And I can’t think of any movie or drama, that I’ve seen him in, where I don’t absolutely love his fight scenes.  I’m talking pausing the video and watching it again and again.

I did do it a couple of times in Rough Cut, the name is appropriate to this movie in every way, even the ending which was so bloody.  Anyway, I thought it was cool.  But if it were any other actor not on my list of droolers, I’m not sure I would have liked this movie that much.