So I’ve stumbled ~again~ onto a new actor called Rain.  It’s my understanding that he’s a singer as well as an actor (aren’t they all?).  Because I am not into South Korean Pop or KPop, I never knew who he was.  I must say he has a very unique and interesting look.  And he has a very bad boy air.  **Very Bad**.  I know nothing about him, absolutely nothing.  He could be a clean cut angel good guy behind closed doors, but I doubt it. 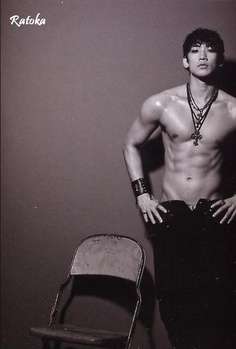 He’s being hailed as having the best body of all the KPop/KDrama eye candies.  From what I’m seeing so far, either he spends a LOT of time in the gym, or a lightning bolt struck him at birth and he grew into those fabulous muscles. Tyra Banks always talks about “modeling from H-2-T” or Head-to-Toe.  Well, he is muscular from H-2-T.  It’s obvious whenever he’s on his work out schedule…he doesn’t neglect a muscle.

However, since I’ve not seen any of his movies or heard any of his songs, I’m sure you’re wondering if I’m just posting to admire his beauty? Not entirely.  I wrote a post last week about Kim Woo Bin and the focus of that article was basically there’s not enough uniquely handsome  actors like Kim Woo Bin and too many pretty boys that I won’t name in this entertainment business.  That’s all over the world, South Korea has not cornered the market.  And I am completely refreshed when I see someone like Rain with his completely unique looks.  I’m still basking in my Hyun Bin Glow, I’m down to probably 2 more shows that I want to watch with Hyun Bin.  But when I’m done….I’m going to be on the hunt for a “little” Rain.