I have finally made it to Korea.  My friends all think I am stark raving mad, but these people don’t really know how much of a travel bug I have, or my intense desire to experience, live in, try, new cultures.  I am already planning my second trip here, even while I haven’t left yet, but I would like to do my next trip differently.  If I can take a month, and lump Korea into an Asian tour to include Japan, China, maybe Australia, Malaysia….that would all be super awesome. 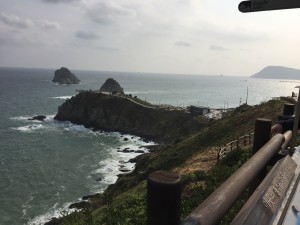 I’m in Busan now, home of the gorgeous mountains and islets, and I’m in the touristy area of Haeundae city.  I have to say Korea, and especially Busan, is a really interesting and beautiful place.  I’d heard so much from others about how Koreans stare when they see a brown person, and I tried to mentally prepare for that.  But when I got here none of that occurred (or at least not as bad as I thought), and I was pleasantly surprised.  I did see a total of 3 brown people in the 4 days that I’ve been here, but I have 4 more days to go….who knows what else I will see.

My second day here I took a leisurely  walk along Haeundae beach and met a Korean Jehovah’s witness, very nice 아주씨 who invited me to watch him and his family spread the word.  His personality was so warm, open and pleasant, that I took him up on the offer.  Of course I was late (the time difference is really hard for me to adjust), but I met his wife who was a retired english teacher, and we had a lovely conversation.  They invited me to join them for lunch which I did.  We were near the Westin Chosun Busan, which has a beautiful park behind it and it was near the water, with the best views you can imagine.  Looking at it reminded me of a Harry Potter movie, I don’t know why, it just did.

We found a gazebo’d picnic bench there and I will always remember that bench as the place I consumed the best Kimchi radish and cabbage I’ve EVER tasted.  I’ve had kimchi before, but never this good.  The wife said her mother-in-law made it.  Good Lord, I would kiss the mother-in-law’s feet everyday if she made Kimchi like that for me.  They also had a sticky brown rice, which wasn’t flavored with any salt and at first I thought it was just bland, until they showed me how to put it in the leaf, along with the Kimchi, some chicken, and octopus, and roll it and eat it.  The flavors from the other items were squished together with the rice, and if the rice had been salted, it would have been too much.  I thoroughly enjoyed the company, the food (the fattest grapes I have ever seen – as big as eggs!) and the Korean history and conversation, some of it I understood and some I did not.

The son spoke very good English, and his Korean was lightning fast – 팔리!  They invited me to church with them Sunday, where they assure me the sermon will be in English, and I plan to go.

When we parted ways I decided to walk around the park which was just beautiful.  I encountered a group of about 20 energetic school kids who just had to say “hello” in english to me ;), a cute little bunny rabbit that posed for my camera, TONS of chinese tourists who apparently comes over each Wednesday on a cruise, the energy was really good, I thoroughly enjoyed it. 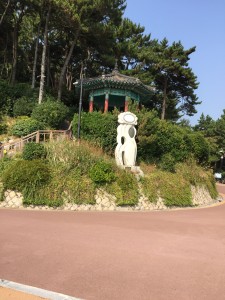 Tomorrow I’m getting up early and going into Seoul.  My adventures continue.  Wish me luck.