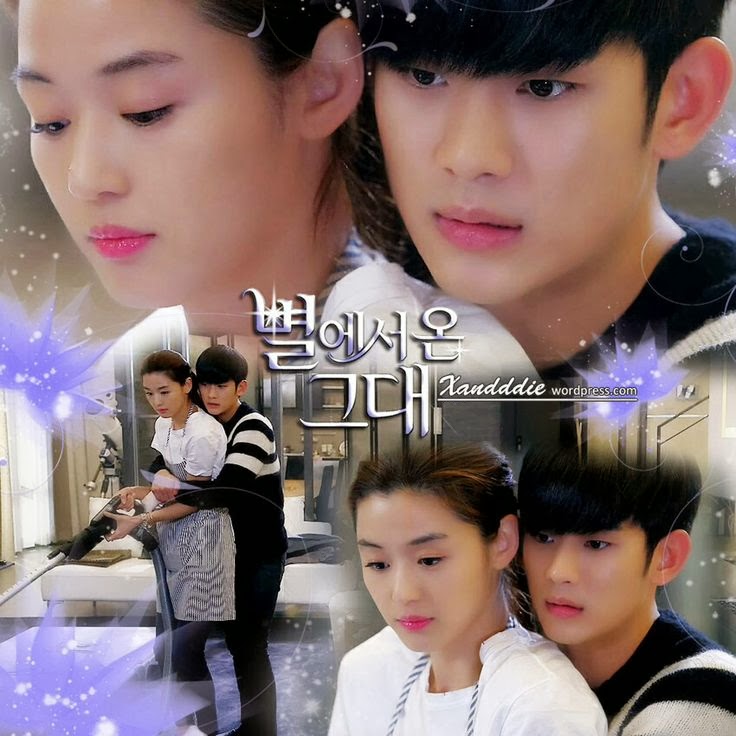 My Love From Another Star is over.  Sob! It was a very nice series, with all the funky push and pull of a love story, the alien magic, I really liked this show.  Even though the ending was kinda strange, it fit the story line, and you could say it was a happy ending.  I loved how they ended it.  “I’m home”.  Perfect.  If you’re in love with an alien, you’ll take what you can get, when you can get it.  I took it, because I wanted the main characters to end up together.

What I’m also having to take is trying to get used to 20 episodes.  I’m starting to wonder if american TV shows have the same number of episodes each season.  I’ll have to look into that.  Korean dramas show 2 episodes a week, usually a show a night over 48 hours.  I will say it’s nice to be able to see what happens next within 24 hours, but then of course, you have to wait another week to see the next 2 episodes.  However, it really feels short to me.  Just as I get into the characters, and the story lines – it’s over.  Maybe I need to get a life?  I thought I had one ;).

Why am I complaining about the short series lifespan?  Well when you get into these series, you get into the characters, some you love and some you love to hate.  20 episodes is great if you get to see the characters again in a season 2 and so on.  Multiple seasons typically end with a cliff hanger, then you bite your nails in anticipation until the 1st episode of the following season, where you can see the characters again, and continue on with the story.   With Korean dramas, if you’re lucky enough to even get a season 2, it’s with new actors, new characters, new story line.  An example of that is I Need Romance.   All 3 of the seasons were great, had great characters, especially enjoying season 3, but the fact that I won’t be able to see “Sweet Potato” any more after 20 episodes – sucks.

These “mini” series, is the equivalent of giving a hungry fat kid the last minuscule bite of a juicy burger.  That would be a major tease.  I really enjoy these shows, their music, the cultural differences, discovering new actors and their acting nuances, the progression of the characters, and then …. poof! They’re gone.  I will never again see Choi Young Do of Heirs with his sassy attitude, cool clothes, and sarcastic wit terrorize his classmates at Jeguk High again.  Unless of course I want to watch reruns. Not.  Think American TV, example – Grey’s Anatomy.  That series has been on for 10 glorious seasons.  I am still a fan of that show now as I was when it first began and I watch it diligently every Thursday night.  I’ve loyally watch through all the tears, funny banter, cutie-pie actors (McDreamy and McSteamy), deaths, births, weddings, make-ups and break-ups,  etc and I’ve loved it all.