Just before the thanksgiving holiday I’d discovered Korean TV,  and I fell in love.   It was a typical Saturday night.  I was home in my bed underneath my blankets, bored to tears, with the remote control in my hand and over 300+ available channels on cable with nothing to watch.  Out of frustration I picked up my laptop and I decided I would go on Hulu.com. I love Hulu.com because I can catch up on all my shows, and watch shows that I missed from the previous evening.  I watch an insane amount of TV in the evenings. When I am supposed to be asleep at 12 or 1 o’clock at night, I am still watching TV.  I work in a really stressful business, and watching TV calms my nerves, it allows me to take a scatterbrain and focus all that scatter into one plot, one story, one focus. 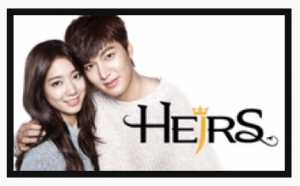 So on that fateful Saturday night, I was looking for a documentary or something unique, something I’ve not seen before, and I saw an ad for a show called “Heirs“. What caught my attention was the absolutely  gorgeous young man (Lee Min Ho) who had his arms around a really cute young girl (Park Shin Hye).  It seemed a bit high school-ish, but I’ve always liked those types of shows anyway.  I didn’t realize that it was a show taped and spoken entirely in Korean, until I just clicked on a random episode and started to watch.  The eye candy that is Lee Min Ho kept me watching…… and reading the subtext. Now it’s important to know that I HATE movies or shows that require me to read subtext the entire time.  I feel like I miss out on certain nuances in the actor’s facial expression because I’m too busy reading.  A sentence spoken in a foreign language, with dripping sarcasm, can be missed in the actors’ facial expression because my eyeballs are focused on reading the sentence and not focused on the actor’s sarcastic facial expression.  The storyline kind of caught and kept my attention a little bit; rich boy bumps into poor girl in America; rich boy goes back home to Korea; poor girl goes back to the same country; and somehow their paths cross in school and at rich boy’s home, and they like each other but they can’t really be together blah blah blah.

I am a huge romantic at heart. I love romance shows with a twist. I love romance novels. As a young kid I ferociously read novels written by Daniel Steele and all those other romance authors.  I love the happy endings. I want the boy to always get the girl. I love it when the boy tries – hard. I love it when he never gives up. And the show Heirs had all the ingredients of the things that I love.  Eye Candy (lots and lots of it), money, funny plots, sarcasm, and 20 episodes just to tell me all about it.  It allowed me to escape. It allowed me to get into this world of make-believe where I can just drool over some of these famous Korean actors.  And there were tons of eye candy to drool over.  There was Lee Min Ho.  By my standards Lee Min Oh is just a pretty boy and if I were 18 again he would definitely be my type – love his height, the dimples, the smile, the expressive eyes…who knew?  But Choi Jin Hyuk and Kim Woo Bin did it for me not because they were just drop dead gorgeous, but because the characters were interesting – and funny. Kim Woo Bin’s character (Choi Young Do) was one of a bad boy, that immature, childish kid who oozed sexy sarcasm (is that even possible???), fell in “like” with Park Shin Hye’s character (Cha Eun Sang) but didn’t know how to communicate it without being a pain in someone’s ass….. all while being wrapped up in this neat little package of tall, slim, young, crazy sex appeal.  His walk – just downright bad boy sexy. His voice – “off-the-chain” sexy. There is just one phrase I can think of when I think of Woo Bin – Gush Fest! (or Sexy….did I say that already? sorry!)   But my personal favorite male on the show is someone who didn’t really get a lot of air time, and I didn’t initially notice him at first because of the blinding glare coming from Lee Min Oh and Kim Woo Bin.  He is none other than Choi Jin Hyuk. I mean his character (Kim Won) was just so downright mean and cold. I started to notice as I was watching that he looked darned good in a suit. I mean nobody was rockin’ a suit like he was rockin’ it! And that deep sultry voice….

Now that I think about it, who could play “meanie” if they didn’t have a voice like that?  Kang Ha Neul (who played Lee Hyo-Shin) was another actor that crept up on me slowly.  I noticed him the first time I saw him as a good looking young man, but I craved more of a story plot with his character as the series began to develop.  There were tons of other cutie pies, but these were the ones I was drawn to.  You can view Bios and more info about the show

My evenings and weekends started to include my looking forward to watching TV again. Now all of a sudden all the reality shows that I loved like the Real Housewives series, other awesome shows like Revenge, Grey’s Anatomy, even (gasp) Scandal (which I love!!! no one can even talk to me when that show is on) I recorded them all and watched them later – way later. When I discovered any new Korean drama with any of my favorite actors, I did all night marathons where I would watch an entire series of 20 shows from early in the afternoon until 2 o’clock in the morning. I even took my iPad to the gym and watched while on the elliptical machine.  Way to track an hour folks, and because I hate exercising, these shows on my iPad really helped take my mind off that torture.  I realized I was also losing sleep, but now I have a new found hobby and I wanted to find out everything about these dramas.  There was an added plus; as a kid I was always fascinated with foreign languages, the minute someone spoke another language I wanted to learn. I started to learn some new phrases. Little stuff, nothing big – “de” (or is it “ne”? can’t tell yet) means yes, “Kamsimida” is thank you (I’m sure I butchered that word and spelled it wrong), “cre” – ok or alright, “cre chi” – still learning what that means, “araso” I think means ok, “anyo” means no “ajuma/ajusi/sunbae” I think senior, “oh de ga” means where are you going…. (this is all spelt “phonically”  I don’t know any real korean words and have no idea of the alphabet – this is the best I can do to communicate the words in writing).   I keep hearing a few words that I am now recognizing and it makes me think I might pick up some things the same way a baby learns to talk.

My repertoire of shows started growing from Heirs because I started watching shows with individuals I just want to look (drool) at.  I looked up all of Lee Min Ho’s shows – Boys Over Flowers (which I couldn’t stomach in the first few episodes but I came to love that one, especially the happy ending),  Personal Taste (which I thought was so cute), and City Hunter which was also one of my favorites and I watched the entire series and loved Lee Min Ho in it.  His acting was way better in City Hunter and Personal Taste.   I Also looked up Choi Jin Hyuk’s shows and watched about 4 or 5 episodes of Gu Family Book (didn’t really like the show that much) and I love him in “I Need Romance“. Love – That – Show!!  Maybe because  it reminds me of Sex And The City, more realistically because Choi Jin Hyuk was one of the main Actors.  I believe I’ve watched the entire series once, but episode 11 with the love scene (watch the love scene here and watch the making of the love scene here) with Choi Jin Hyuk…. I must’ve watch that thing at least 10 times,  it was freakin’ awesome.  And believe it or not my favorite part is not so much the kissing or when they get finally onto the bed, my favorite part is while he’s kissing her outside, without missing a beat or coming up for air, he reaches down and picks her up, and when he twists slightly to pass through the gate his shoulders shows off all those fabulous muscles right through his vest and shirt! Ooohhhhh, it’s illegal to be that gorgeous, and not in a Lee Min Ho pretty boy kind of way, but a manly way. That’s why Choi Jin Hyuk is my favorite.  I stumbled on a series he was in with a LOT of shows called My Daughter The Flower, but I can’t seem to find any of the shows with english subs, I would just kill for that.

The men (or in some cases boys) seem to go after what they want with a vengeance and passion, despite the push and pull, showing no fear about how and what they feel, in that male hunter primal way, and I think that is what appeals to that romance addict in me.  I most certainly don’t speak for all women, but I think the majority of us women want a man that we find attractive, to chase us, to let his feelings be known, to let us know that he’s a man’s MAN but his weak spot is the girl of his dreams!, that he’ll throw a punch for his woman if need be.  We want that, and so far the Korean shows I’m watching gives me that.  Enh, shows like Hiers, Boys Over Flowers, they’re all in a high school setting sometimes, which is not my idea of an ideal setting as I’ve passed high school a long time ago, but I look past all that to the underlying love story, and that’s what draws me in (ok, really?  Along with the eye candy as well – be honest!).

But the main reason why I love these Korean shows is…. Nobody Tells A Love Story Like Korean Dramas.

5 Responses to "How To Tell A Love Story"