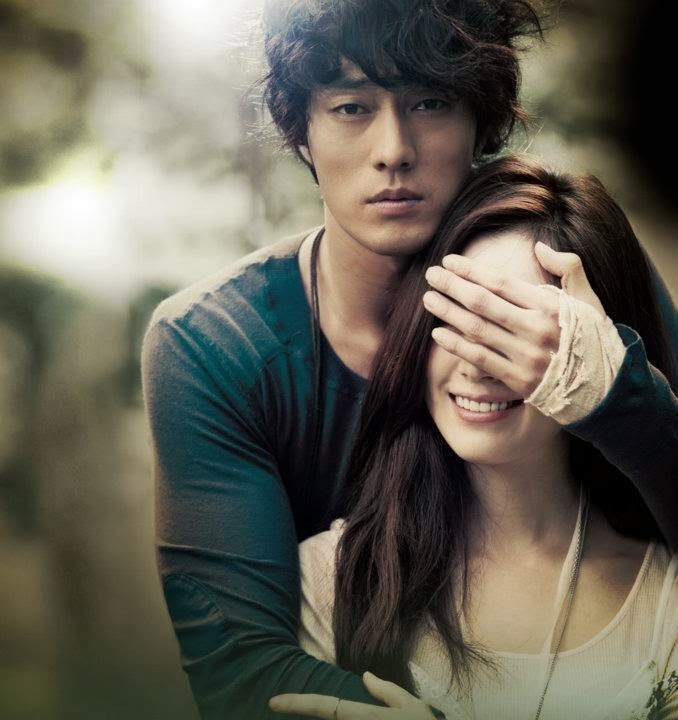 I just watched the 2011 movie Always with So Ji Sub and Han Hyo Joo – for the 2nd time.  I really should change this blog title to SoJiSubLove.com (I’m kidding), ’cause I’m always posting about how much I love him in any movie.  He could be in an annoying version of Sesame Street and I would suddenly love that show.  I liked this movie though, because once again his acting was superb.  In the beginning when Cheol Min (played by So Ji Sub) first met Ha Jeong Hwa (played by Han Hyo Joo) he was awkward, shy, quiet, patient.   Why do I like that so much I wonder?

It’s nice to see a romance movie not all about T & A, pretty boys, and party girls.  I get enough of that here in the U.S. and there are days when I crave some good old fashion love stories with depth. In this movie, Cheol Min is an ex-boxer with a past who takes a part time job as a parking booth attendant.  He meets Ha Jeong Hwa who appeared to have a daily habit of watching TV after work with the previous attendant in exchange for some home cooked meals.  He soon realizes she’s blind when she doesn’t immediately realize he’s not the same person who’s normally in the booth.  And he’s quietly smitten with her as he’s suddenly aware he looks forward to seeing her each day.  They go to dinner where he harshly avoids answering questions about his past, but he fesses up by the end of the date.  He’s at the right place at the right time when she is attacked by her sleazy boss, and a romance evolves where Cheol Min takes responsibility and care of her.

Now I’m not going to give away the end, but I’m curios as to why there is always some SERIOUS tragedy in these Korean movies that involves love, sacrifice and a whole “lotta” pain.  Every movie or romance series I’ve seen has a guy who wants the girl or already has her; girl has challenge and of course guy in love wants to help (usually in the form of money); guy goes and borrows/works for/get in trouble for money and gives to girl without girl knowing where said funds originated; some tragedy ensues and guy disappears or worse – dies.  It is always so tragic.

This movie has those qualities,  and I have a love/hate relationship with that aspect of this movie.  I love that it’s a blind Ha Jeong Hwa that Cheol Min falls for.  I love that she is independent.  I love that he is not aggressive with his love until that creighton of a boss comes to her house and tries to “push up on her”.  I love that he beat the “bejeebeez” out of that bosses a**, and he came right on time.  I love that he did the manly thing and showed his love for her by fixing little things in the house, the window, the threshold. I even loved the tender moments they share once clearly their relationship had moved to that point.  He took care of her with the little things.  He showed love by doing the little things.  You male readers could learn a thing or two by watching the 1st half of this movie.  I don’t know about other girls but  I get excited about those little things more than a dinner date, some jewelry….. (more than jewelry? OK lets not get carried away!).

Watch Always now on YouTube or Get the DVD

Anyway, I hated that he chose a violent route to help pay for her medical expenses but those fight scenes were AWESOME!  Oh the body on this man, I did try to get through one post without drooling but I just couldn’t do it, people. Back to my point.  I don’t want to spill the beans on the whole movie, but I actually watched it twice.  It had it’s action scenes and a little violence, but you know me, I can always find the romance like a heat seeking missile, the underlying love story, the quietness with which that story was told, and the loudness of the love that was declared.

If you’re a romantic like me (and if you adore So Ji Sub like I do), you’ll like this movie.  If you’re an action junkie, you’ll hate it because there’s not too much of that and it takes a while to get to the action.  If you love ironic twists, turns and happy endings, and you haven’t yet seen this one, Always is the movie to watch now.

This one was hard to find with english subs, I had to watch it on YouTube, which wasn’t always good quality video (that may be because of my wireless speed though).  You can also follow my link up top and buy the DVD.